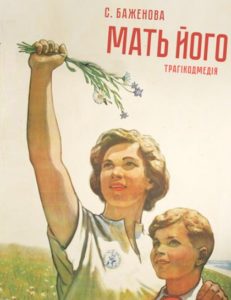 Volodymyr, in his 50s., did not know any other mistress than science. He had no other live-in girlfriend than his mother. His mother, Zoe, is a hundred years old. Maybe more. Or maybe she was always and
always will be. And always will be her unwillingness to share her son with another woman, and her toxic and destructive love for him. Zoya knows that in the village, when it was time to die, you took out the
coffin from the attic and lay down in it, but if you did not die, you went to graze the geese. However, for some reason, neither she nor her son notice that they are together laying down in that coffin, without
even starting to live, and for many years have been grazing those geese … But maybe they will be revived by a young and very lively girl Zhenya, who happened to be in their house?
The Maly Theater performance «His damn Mother» based on Svitlana Bazhenova’s play «How Zoya fed the geese». The performance does not look for someone to blame and not reveal the thieves who steal
each other’s happiness. This is a dramatic story about such different love: naive, weird, sadistic, painful, passing and eternal.

9 Replies to “His damn Mother”